Bonus: I made a new tool that shows Journey Mode research progress! If you decided to take up a challenge of researching every single item in the game, this can help you see what you’ve done and what you are missing - all inside your web browser 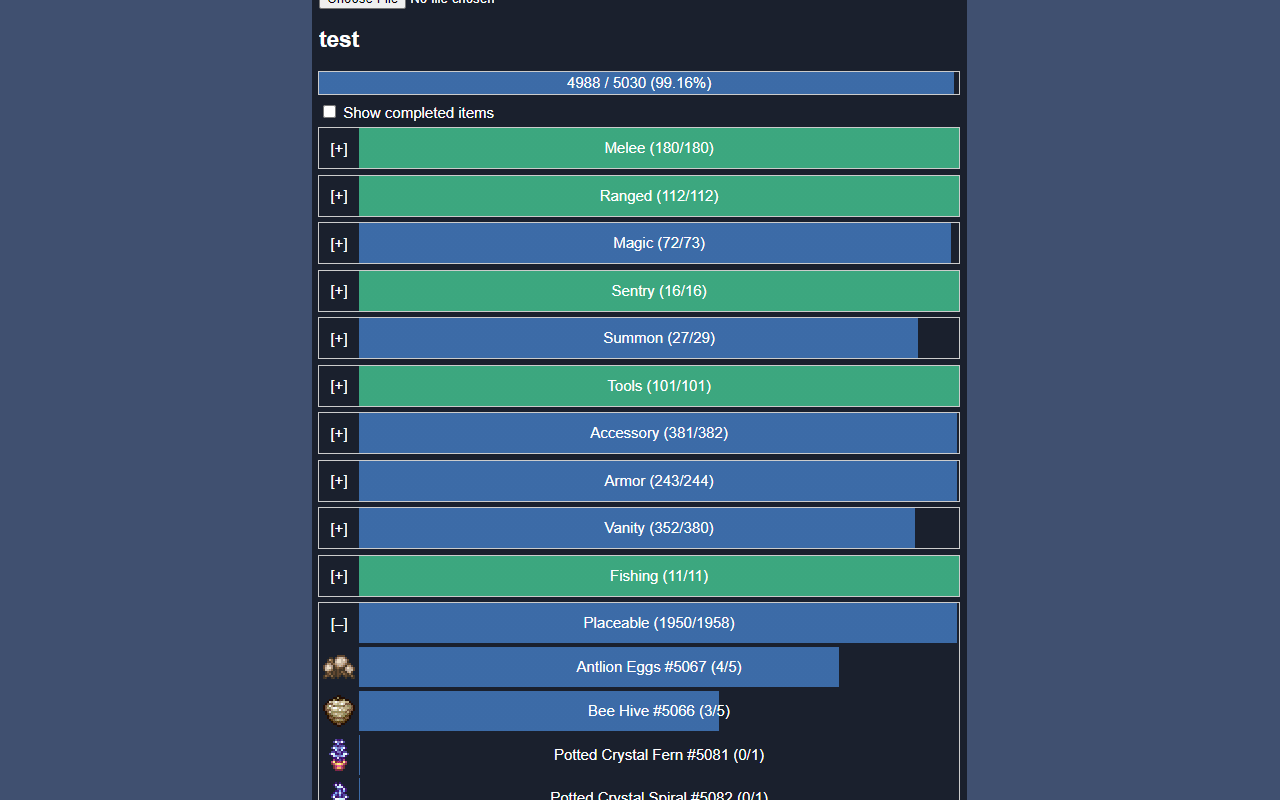 A web-based character editor for Terraria.

Hey. Please fix the bug. Characters with names made from numbers cannot be edited. I tried to change the amount of hp of my character named "42",but for some reason the hp did not change. So sad.

You might be doing something wrong - like not replacing the file with a new one. See troubleshooting

No, I did everything right, because before that I had already repeatedly edited my characters in your program. And yes, the problem has already been resolved. It turns out that not only the numbers prevent me from changing the character, but saving in the cloud also somehow affects him. I had to experiment with all this for about an hour to come to a solution. And the solution is relatively simple. I created an absolute copy of my character and named it "copy" (Yes, I am very original). Transferred all things, deleted the original, and saved it in the cloud. And in Terraria itself I changed the name of the copy to "42" (The name does not change in the files). To edit a character, I just need to change his name to anything that does not contain numbers and turn off the cloud. And after editing, I turn on the cloud again, and change the name to "42.". And yes, I have no idea how, but the cloud somehow overlays the data of the original character on the new one. That is, for example, when creating a new character, I did not take into account that he would not have an open world map that was open for the old one. This upset me, as the whole world would have to be re-studied. But then, somehow, after renaming it to "42" and saving it to the cloud, the map suddenly opened up. I don't know if the cloud can work like this for a long time, but in any case, I have no more problems. And yes, maybe you cannot find the problem, since you are working on windows 10. I have 7. It is unlikely to have any effect, but .... maybe?

Cloud saving in general can cause all kinds of weird things - by premise, it will check whether the save files are in sync when the game opens and will upload them when the game closes, but changing files both with the game closed or while the game is open is undefined behaviour - e.g. Steam might straight up cache small files in the memory for quick access.

As for my doubts of name having anything to do with this (unless it’s on Steam’s end), the character name has no meaning - in fact, your character name can even be different from the file name, which will happen if it contains characters that are not allowed in a file name (like \/<>|"*: on Windows)

If your character with a name made of numbers can be edited, but mine cannot, then this is caused by something else, more strange. I don't know what exactly, but not only in numbers, I guess. Interesting. I will try to conduct tests, and identify the real reason, and then inform you. Good luck.