A downloadable game for Windows and Linux

This is a Super Crate Box mod that introduces local and online multiplayer modes with support for up to 4 players.

The source code was obtained via Humble Bundle.

Multiplayer-related code was heavily reused from my existing projects.

Linux version does not work when using itch client.

how to play with friend?

You’ll need to port forward or use a VPN service such as Hamachi or ZeroTier.

on line do not work

Scroll through the comments to see 7 years worth of me telling people that they need to port forward.

is it for mac

With some luck, the single-player Steam version of Super Crate Box might work on Mac. I do not currently offer Mac versions of my freeware games/mods due to associated costs and complicated maintenance.

Ideas that might be fun: 1 - player revival (touch gravestone to revive) , 2 - friendly fire

There is a versus mode (in Extras). Reviving could be interesting - currently the mod works roughly like SCB’s arcade cabinet version did.

You will usually have to port forward unless you use software that simulates a local network (such as Hamachi or RAdmin VPN).

This game is great. I really like it! Really good job! But could it possible be ANY LOUDER?! These noises are the loudest thing I have ever heard!

NO LOCAL MULTIPLAYER IN KEYBOARD :(

vJoy would likely work for this.

The original game did not have control settings so this doesn't either.

My Gf and I loved the game and are sooooo glad that you built this local coop version. Great work! If anybody comes here and still isn't sold on the game, watch a little bit more gameplay to get a feel for how great this can be at couch parties, etc.

I tried to play with a switch pro controler and i wanted to now if that is possible or if there's a way to set up the gamepad for the game. I appreciate the answer in advance.

I do not have a Switch Pro controller, but if it doesn't work, it most likely doesn't support XInput, so you'll need something like x360ce to disguise it as a controller made according to standards of last 15 years.

Hey me and my friend are trying to play  but we have a problem and we cant play we got in the same network in hamachi and we dont know how we are supposed to connect like where to put the port the ip and where the hoster is supposed to wait the players to join i mean the begging where the port is where its says "start" or where the playeres p1 p2 p3 p4 and what is gamepad1 gamepad2 or when the fight start i dont know sry for the bothering but i rly hope we can play cuz the game is so fun :D

The screen with P1 and P4 is when the other player would be connecting. Make sure SCBT is allowed in Windows Firewall! (and that you use the IP from Hamachi)

You can click "no thanks, just take me to downloads"

i really want the source code and cant find it from the link you provided please help?.

Well that bundle ran for a week in 2015, so you might be a little late with that.

I've not been following SCB news much so I can't tell you if it ever popped up anywhere else.

However, SCB is not a very complicated game, so you might find one or other open-source example of such genre?

Actually! I donated to that bundle. I may have the source, but I probably don't have permission to distribute it.

Hello! IP address to use is shown in Hamachi itself. IIRC you can also right-click on the user in network and pick "copy IP". So one player would host the game while being on the network and the rest would use that as IP/Address to connect to them.

You set the port yourself (with Hamachi, default should work) and then the person connecting would specify the same port (so tell them which one you picked).

So you set the port on "Host" screen, pick Start (and get a player list screen), then the person joins (and shows up on player list), and then you pick Start to get into the actual game.

Does this require Super Crate Box?

It doesn't - Super Crate Box is freeware so this is just a standalone mod for everyone's convenience.

See this reply - the game doesn't detect gamepads as such, it just loads whatever control schemes that are defined in a file, so you'd need to add two more to there.

Is there any chance that you are able to remove the fact that the host has to set the input delay to the person with the highest ping?

Potentially at some point of future, but generally fancier lag compensation methods are a little out of scope for freeware mods.

Current implementation relies on delay to not have to directly transmit ever-increasing number of enemies (causing issues for players with poor connection in process). I'd probably try to do things differently nowadays.

Just doesn't work with usb gamepad, and when i play solo with just a keyboard, the game crash, with a fix screen

Im trying to play online with my friend yet it always say that the connection timed out, any thoughts?

You will usually have to port forward (look that up) unless you use software that simulates a local network (such as Evolve, Tunngle, or Hamachi).

I can't remember if the game starts in full-screen, but try Alt+Enter? Or set it to run in Win8 compatibility mode via file properties.

It just made it smaller it's still a blank screen

im a bit late but the game capped at 50fps. how can i change that? i'm used to playing scb on steam which is 60fps

This is a strange question, but are you sure that it's 60fps? I just checked locally and Steam overlay says that it's 60fps, but in-game values still report 50fps, and it doesn't seem to be faster or smoother than SCBT.

I noticed that there is no auto jump in the game. Is there a way to change this or do I just have to deal with it? No disrespect I'm just wondering because I'm used to the base game having an auto-jump feature.

That's... an interesting question. I think auto-jump may have gotten lost in spacetime while I was tweaking something jump-related (at one point had added the ability to jump a few frames after dropping off platforms, ala Spelunky). Perhaps in a future version.

Thank you for replying, I love this version of the game. Great job!

Thanks so much for making this! Just what me and my brother needed! :)

you should make it so that player 1 could use WASD and F to shoot and player 2 uses ARROW KEYS and CTRL to shoot.

(if your wondering why, its because i dont have controllers)

You can open "%LOCALAPPDATA%\SuperCrateBoxTogether" in Explorer, open "controls.ini" with notepad, and edit controls to whatever you want.

Reply
turlututu4 years ago
My gamepads are well recognized in Wine but dont seems to work in the game, how can i edit the controls.ini ? Thanks in advance :) name=Gamepad 1 left=-gamepad1x right=+gamepad1x
Reply
YellowAfterlife4 years ago (1 edit)

Is that on Mac or Linux? The path would usually be like  /.wine/drive_c/users/<your name>/AppData/Local/SuperCrateBoxTogether/controls.ini. Using directory search would also seem like a good option, as the directory name doesn't change under Wine.

Edit: If  that question is about what the format is, try changing gamepad1 to gamepad5 for DirectInput. I'm not entirely sure if this game was compiled with a sufficiently new version of GameMaker to support that though, but worth a shot. In worst case could set controls to keyboard buttons and then run something to map gamepad actions to keyboard.

Hmm... perhaps assuming that the game would work fine after 3 months worth of software updates wasn't a wise plan. What did you do prior to the error appearing?

Edit: Okay, seems like the error occurs only in non-debug versions of the game on players joining. This will be fun.

The error happened when we tried to connect to each other. The ports were fine and such but in many occasions the above error popped up, or the game ends up crashing.

It turns out that `[@]` array read operator (`myvar = array[@index]`) is completely broken in GameMaker, just returning 0 both if reading out of bounds and if applied to something that isn't an array at all. Previously I was lucky (or careful enough) to not have made any missteps with this (thus not even knowing of this behaviour), but somewhere in the recent changes a bug was introduced, so GM' runner gets a 0 instead of showing an error, then it passes 0 as the index to one or other data structure management functions, and then everything spectacularly explodes before you could even blink.

I've re-enabled an older (working) version of the game for now while I'm looking over the game code to change everything to use `[]` operator for reading so that I can locate the actual source of problem.

Do you have the source available? I was on and off working on a two player Super Crate Box since the source became available and just found this. I want to see how you've done it. Thanks!

This is based on Humble Bundle version of the game source code.
The source for my edited version currently is not available (quite rushed, and, as it turns out, largely working by series of coincidences), and it doesn't seem to be legal to redistribute the edited sources for anything from the bundle but Spelunky (which was already open-source).

But basically, for local multiplayer, you just need to have each projectile store the ID of the player that fired it, and change things like "Player.x" to get that from the correct player (nearest for AI, owner for bullets, all for conditions). Then it's just lots of small edits like making laser guns not fly out of all players when firing.

I ended up changing a substantial amount of code in the game, but that was largely related to online multiplayer, and unneeded if that is not your goal.

God bless you and the internet. 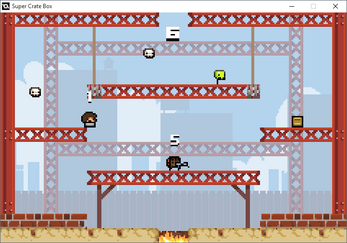 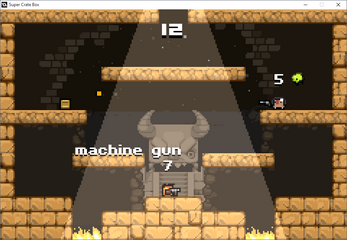 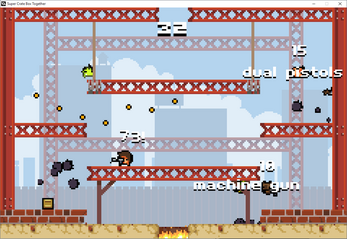 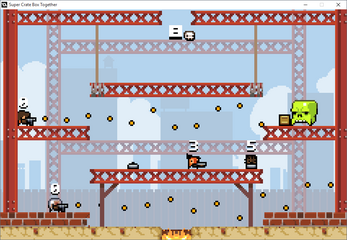